Apple and Samsung’s relationship is apparently not so strained as to prevent the South Korean electronics from providing the chips that will reportedly power future iPhones.

Samsung will supply Apple with A9 chips based on a 14-nanometer process node starting in 2015, the Korea Economic Daily reported Monday. The chip would go into production in 2015 and power an iPhone theoretically dubbed ther “iPhone 7” that could be released in the latter half of 2015, according to the report. END_OF_DOCUMENT_TOKEN_TO_BE_REPLACED

Apple on Monday released the third beta build of iOS 7 for iPhone, iPad and iPod touch to its development community for testing, addressing pre-release bugs related to a range of issues, including Messages, iCloud and AirPlay.

END_OF_DOCUMENT_TOKEN_TO_BE_REPLACED

Android 4.3 is heading our way fast, and it’s been spotted on an HTC One. I’m excited to see what Google has in store given this is the first major Android update since Apple’s unveiling of iOS 7, the most dramatic overhaul of the iPhone, iPad and iPod’s software ever.

Android 4.3, expected to be an update to Jelly Bean rather than a full-fat new version, is likely to feature support for Bluetooth 4.0. The HTC running 4.3 has been spotted in a listing by the Bluetooth Special Interest Group, the model number reportedly matching with the model number of an HTC One with factory-fresh Android aboard. END_OF_DOCUMENT_TOKEN_TO_BE_REPLACED

The Samsung Galaxy S4 has won two award from UK consumer research company Which?. It found that Samsung’s Android flagship is not only the fastest smartphone currently on sale, but also the one with the best battery life. 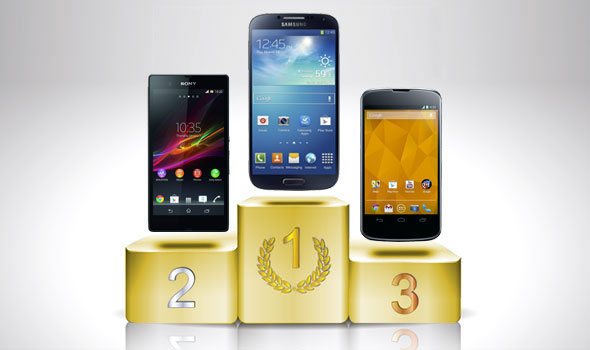 END_OF_DOCUMENT_TOKEN_TO_BE_REPLACED

At some point, rumors become so persistent it is hard to dismiss them out of hand. Apple building cheaper iPhones retailing for $99? Yeah, there may be something to this after all.

Reuters reports, based on sources in Apple’s Asian supply chain, that the company is considering building two new iPhones. One will be a 4.7-inch smartphone while the other could be a 5.7-inch “phablet.” Apple is also considering making cheaper smartphones that would be launched in a variety of colors that would sell for $99 (presumably on a two-year contract) and be aimed at emerging markets like China and India.  END_OF_DOCUMENT_TOKEN_TO_BE_REPLACED

Fancy yourself as the next Christopher Nolan but only have a smart phone-sized budget? Let me walk you through the apps, accessories and workflow you need to shoot beautiful movies on your iPhone 4 or 4S. Action!With the iPhone 4 and iPhone 4S, Apple made HD movie-making cheap and accessible. They let us shoot video in glorious hi-def (up to 720p resolution on the iPhone 4 and 1080p on the iPhone 4S), and quickly and easily upload our footage to a watching world. END_OF_DOCUMENT_TOKEN_TO_BE_REPLACED

The rumored upcoming HTC One Mini smartphone, previously all whispers and hearsay until now, will ship to customers with that name and include a 720p resolution display, according to one of HTC’s own websites. END_OF_DOCUMENT_TOKEN_TO_BE_REPLACED

Well it’s time yet again to throw two great tablets into a Tablet War. This time we’ve got the Google Nexus 10 (manufactured by Samsung) going up against the Sony Xperia Tablet S. The Nexus 10 is running on a dual-core Exynos processor and the Xperia Tablet S is running on the popular and powerful quad-core Tegra 3 processor. Let’s get this battle started with some specs. END_OF_DOCUMENT_TOKEN_TO_BE_REPLACED

So you’ve just received your gorgeous new Samsung Galaxy S4. Isn’t it lovely? After you’ve finished caressing its sleek lines, admiring its gorgeous Super AMOLED screen and gasping in amazement at its insanely powerful processor, you might want to consider taking more control over it — and in Android terms that means rooting. END_OF_DOCUMENT_TOKEN_TO_BE_REPLACED

There are plenty of complimentary things you can say about the Kindle Fire HD. “It has a stellar collection of apps,” unfortunately isn’t one of them. Amazon has customised Android to within an inch of its virtual life and banished Google Play in favour of its own Amazon Appstore. Take a stroll down its digital aisles and you’ll find the selection somewhat underwhelming — there’s no Gmail, no Dropbox, no Instagram. END_OF_DOCUMENT_TOKEN_TO_BE_REPLACED